The cover story in this week’s issue of the news magazine The Week says:

The cover shows two investigators with grim looks and wearing what looks like aluminum foil hats that rise to a point.
In the article it says:

“Ron Johnson last week jumped on a report that two FBI agents had mentioned a “secret society’ in text messages to warn Americans that FBI agents were ‘holding secret meetings off site —presumably to plot against the president. The next day, Johnson backed off his claim when it became clear the ‘secret society’ reference in the texts was a joke. Nonetheless, Sean Hannity and other Fox News anchors stayed in ‘full tinfoil-hat mode,’ delivering fevered nightly calls for the purging, and jailing, of anti-Trump conspirators. What’s more disturbing said Michael Gerson in the Washington Post, is that even mainstream Republicans, including House Speaker Paul Ryan, are echoing Hannity’s calls to ‘cleanse’ the FBI.”

I’m unfamiliar with the expression “tinfoil hat” and a few usually knowledgeable friends I called were also unfamiliar with it. But for it to be on the cover of a weekly news magazine it must be fairly popular – it must somehow have passed me by. Sure enough it is in most online dictionaries and a news search seemed to indicate that it is fairly widely used.
____________________________

tinfoil hat: Metaphorically, a hat made of tinfoil that people who subscribe to conspiracy theories wear, to prevent electromagnetic signals from being beamed into their brain. <NASA just made an announcement that they've found no evidence of life on Mars. Break out the tinfoil hats.>
___________________________

Used in allusion to the belief that wearing a hat made from tinfoil will protect one against government surveillance or mind control by extraterrestrial beings. <‘You don't need to be wearing a tinfoil hat to understand that your privacy might not be as private as you would think.’>
___________________________

tinfoil hat: noun (sometimes abbreviated TFH) [[Wow! It’s so well-known it even has its own abbreviation]]
A piece of headgear made from one or more sheets of tin foil, aluminium foil, or other similar material, especially when worn in the belief that it shields the brain from electromagnetic fields, or against mind control and/or mind reading.
___________________________

tin foil Hat: A tin foil hat is a hat made from one or more sheets of aluminium foil, or a piece of conventional headgear lined with foil, worn in the belief or hope that it shields the brain from threats such as electromagnetic fields, mind control, and mind reading. The notion of wearing homemade headgear for such protection has become a popular stereotype and byword for paranoia, persecutory delusions, and belief in pseudoscience and conspiracy theories.

Origin: An early allusion to an "insulative electrical contrivance encircling the head during thought" appears in the unusual 1909 non-fiction publication Atomic Consciousness by self-proclaimed "seer" John Palfrey (aka "James Bathurst") who believed such headgear was not effective for his "retention of thoughts and ideas" against a supposed "telepathic impactive impingement". For further details see tin foil hat.
___________________________

The following quotes are from archived news sources:


<2000 “While the fascination of assembly of devices and processes at the atomic level draws respected academics and corporations, it also carries along with it pseudo-philosophers, dreamers, and the occasional being wearing the tinfoil hat to keep aliens from skiving his or her unique and revolutionary applications.”—Medical Equipment Designer, 1 March>

<2002 “Even as the dust settled at the World Trade Center, conspiracy theories about what REALLY happened on Sept. 11 started popping up in e-mails and Web sites. Some of these theories are straight out of tinfoil-hat land.”—The Boston Herald (Massachusetts), 5 September>

<2006 “My exquisitely cultured colleagues at The Post looked at me as if I were standing there naked except for a tinfoil hat to keep the CIA from controlling my brain waves.”— Washington Post (D.C.)[/i], 26 May>

<2010 “Jim DeMint either vetted this guy and decided he didn't care that he holds views that are so far outside of the mainstream that he needs a tinfoil hat, . . .”— States News Service, 21 May>

<2013 “But fluoridation has also served as a lightning rod for conspiracy theorists, who declared it a Communist plot in the 1950s at the height of the Cold War. Anti-fluoride sentiment seemed to recede in the ensuing decades but is now back with a vengeance, with the tinfoil-hat crowd employing social media to perpetuate the 60-year-old fiction that fluoridation is a public-health threat.”—Winnipeg Free Press (Manitoba, Cananda), 14 July>

<2016 “A recent image of Mark Zuckerberg's laptop went viral on social media: people were intrigued most by the fact that he tapes over his webcam. Once seen as the modern day equivalent of wearing a tinfoil hat, it is now, perhaps, a sensible precaution lest hackers get access and use footage to their benefit.”— The Irish Times (Dublin, Ireland, 4 August>

<2018 “Mr. Rizzuto should feel free to put on his tinfoil hat and visit our office with evidence for his salacious conspiracy theories and cuckoo allegations.”—The Examiner (Washington, D.C.), 5 February>

Maybe it's mostly an American thing. A few years ago I made a tinfoil hat (actually aluminum foil) for Halloween. Horribly hot - it could fry your brains!

I've never heard it this side of the pond.

I do rather like it.
ACCESS_POST_ACTIONS
Signature: Phil White
Non sum felix lepus
Top

I have never heard of a tinfoil hat. Tricorn hat however...
. 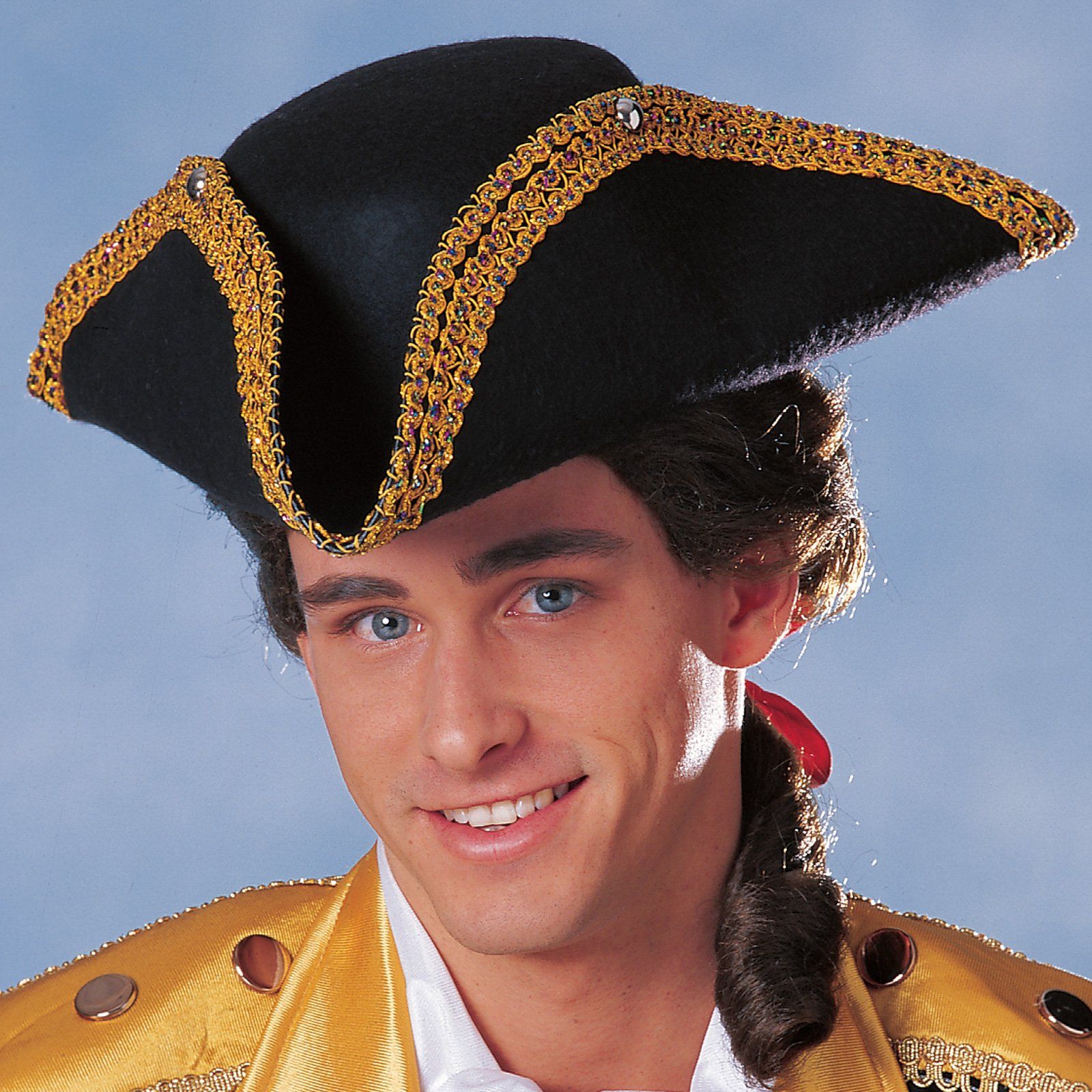 ACCESS_POST_ACTIONS
Signature: All those years gone to waist!
Bob in Wales
Top

Bob, you look rather dashing in that one, more principle boy than roguish highwayman.

But back to the subject ...

It seems, from the various sources, that "tinhat" serves the same purpose as "tinfoil hat". I wonder whether this didn't catch on in the UK because "tinhat" was a joking, but admiring, term for any of the services, principally in WWII, who wore the round steel helmets.
ACCESS_POST_ACTIONS
Signature: tony

Ok, I looked up "Paul Revere and the Raiders" but what is the connection to tinfoil or tricorn hat?
ACCESS_POST_ACTIONS
Signature: tony

Tony, do an image search on them and your question will be at least partially answered.
ACCESS_POST_ACTIONS
Top

Ah, the tricorne. Note that I have used the more proper spelling!
I never realised, I never gave it much thought, that the tricorne is the "modern" name for the cocked hat.

I quote this from Wikipedia:
"The tricorne appeared as a result of the evolution of the broad-brim round hat used by Spanish soldiers in Flanders during the 17th century.[5] By pledging (binding) the brims, a triangular shape was obtained. This shape was favored by Spanish soldiers, as when standing at arms their muskets could be held at their shoulders right or left without hitting the hat brim. War broke out between France and Spain in 1667 over the Spanish Netherlands, and during the subsequent struggle its use spread to the French armies. The style was brought back to France, where its usage spread to the French population and the royal court of King Louis XIV, who made it fashionable throughout Europe, both as a civilian and military wear. By the end of the 17th century, the tricorne was popular in both civilian fashion and in military uniforms. They remained one of the predominant European styles of hat throughout the 18th century. In the United States, only the first five Presidents, from George Washington to James Monroe, wore this style of hat according to the fashion of the 18th century.[6][7] James Monroe earned the nickname "The Last Cocked Hat"[8] because of this."
https://en.m.wikipedia.org/wiki/Tricorne
I enjoyed that!
ACCESS_POST_ACTIONS
Signature: tony

Even cat lovers believe. A foil hat will save him AND his cat.

https://encrypted-tbn0.gstatic.com/imag ... aYy1Yj2Dpw
ACCESS_POST_ACTIONS
Signature: "The question is," said Alice, "whether you can make words mean so many different things."
Top

Notice that the cat's tinfoil hat is shaped like a fish. (Any kind will do — except a tuna fish, for obvious reasons.)
ACCESS_POST_ACTIONS
Top
ACCESS_END_OF_TOPIC
Post Reply
12 posts • Page 1 of 1