Tintoretto [[famed artist of Renaissance Venice]] didn’t idealize his godly or saintly subjects and set them at a remove. He put us nose-close to figures in swirling, cinematic motion; “his high-wire scenes dare us to look away.”—The Week, 26 April, page 23

The degree of difference, distance (as a space, time, etc.) or remoteness separating one person, thing, or condition from another; interval; distance or step apart or away; a degree distant.

<At a short remove upon the same platform was an officer.>
<Her poems work best at a slight remove from the personal.>
<At this remove, the whole incident seems insane.>
<To spill, though at a safe remove, the blood of brave men>
<Only one remove from madness>

The Oxford English Dictionary provides many definitions for the noun "remove," most of which are obsolete, rare, or archaic. The two that are relevant and still in use including their version of the above definition, are:

8a) The condition, state, or fact of being remote or distant; the extent to or degree by which a person or thing is separated from another in time, place, condition, etc.; remoteness, distance; an instance of this. Now the usual sense. [first use – 1628]

3a) The action of moving away or to another place, esp. a new place of residence; withdrawal, departure; an instance of this. Now chiefly North American. [first use – 1555]

The following are some recent quotes from newspaper archives:

<2016 “Only a handful of times in the past half-century has Hufnagel not been in the middle of camp as a player or a coach. Now he’s at a remove. However, that distance shouldn’t grant anyone a sense of ease.”—Calgary Herald (Calgary, Alberta, Canada), 7 June, page 17>

<2017 “. . . here’s an alternative that would allow tech companies to stand at a greater remove: . . . Urging platform owners to interfere, directly or even at a remove, feels like a failure.”—Los Angeles Times (Los Angeles, California), 2 October, page A13>

<2018 “But if the prevailing impression of classical [[music]] is that it is hard to comprehend, then people are going to interact with it at remove.”— Chicago Tribune (Chicago, Illinois), 9 December, page 4-4>

<2019 “Of course, the sacred places could not be left in their natural state. Yet so much stone and masonry place history at a remove.”—The Citizen (Auburn, New York), 23 January, page A9>

One point about removed is that does not have a direction. So, as in the above, your grandparents can be described as your first cousin twice removed.


The following diagram describes it quite well 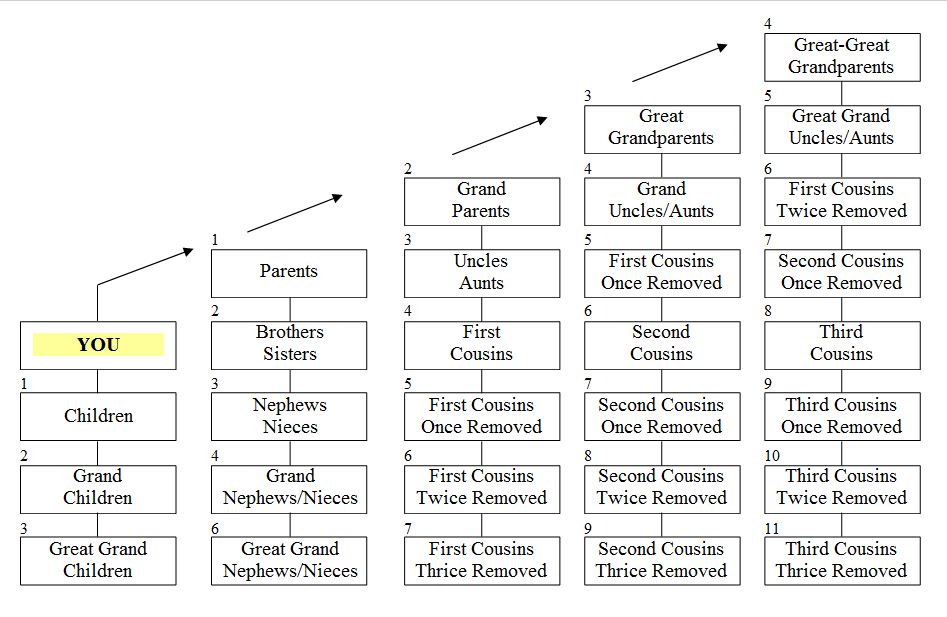 Thanks to you both for that very useful and interesting info. Finally I have a clear idea of what the terminology means!

No, it makes sense, even if it is not easy. The "degree" counts the minimum number of ancestors you have to go back to find a common ancestor (you then have to subtract 1 for the uncle/aunt relationship). If you look at the relationship between "you" and anyone in column 5, you have the following: Reading across the table from "you", everyone on that line is of the same generation from the common ancestor as you are. Anyone above or below this horizontal line is "removed" by the difference in the number of generations' difference between you.

Another aspect of these tables is that anyone who is a direct ancestor of you is a grandparent (or great grandparent, etc.). Anyone who is a sibling of one of those ancestors is a (great ...) uncle/aunt. Your own siblings are brothers/sisters.

If you look at the 3rd cousins box you will see both the one below and the one above are "once removed". The boxes Two above and two below are both "twice removed". The Parents, Grand parents, Aunt and uncle etc are just special cases of the "nth Cousin y removed".
ACCESS_POST_ACTIONS
Signature: tony

No. The very definition of "cousin" is somebody descended from a grandparent or older ancestor but in a different line. Your grandparents are in your direct line of descent and cannot therefore be cousins of any sort.

What this means is that there must be at some point a skip from the direct line of descent to a different line of descent via a sibling of your direct ancestor. There is no such movement between two lines in the case of your grandparents.

Applying the mathematical logic I described above to its absurd extreme, grandparents would actually be -1th cousins twice removed.