This is the place to post questions and discussions on usage and style. The members of the Wordwizard Clubhouse will also often be able to help you to formulate that difficult letter.
Post Reply
5 posts • Page 1 of 1 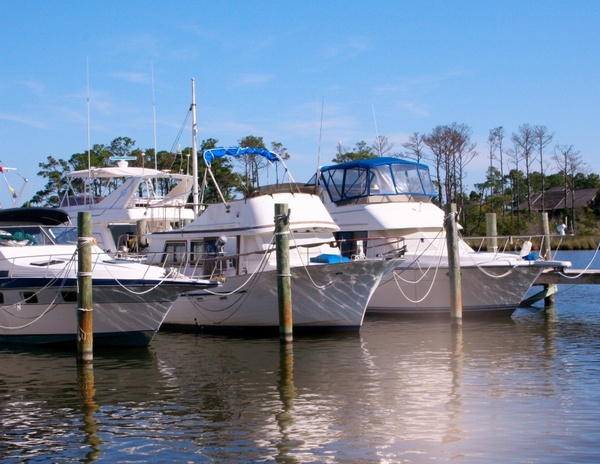 - Hi everyone! What do you call the wooden round tall things next to the ships?

Those are mooring posts.

Incidentally, those are not ships but boats (specifically, they are cabin cruisers).

Ships are large vessels defined primarily in terms of their size, and secondarily by the fact that they are mostly seagoing vessels rather than freshwater craft.
ACCESS_POST_ACTIONS
Top

Erik_Kowal wrote: ↑Wed Apr 15, 2020 11:00 pm Ships are large vessels defined primarily in terms of their size, and secondarily by the fact that they are mostly seagoing vessels rather than freshwater craft.

Unless they are submarines in the Royal Navy, in which case they are always "boats".

While Erik's explanation generally holds true, many people use "boat" as a generic term for vessels of all sizes. But the term "ship" is virtually always reserved for large vessels designed to carry large amounts of passengers or cargo. That said, as Erik intimated, passenger and cargo vessels used on rivers and smaller lakes are generally called "boats", even if they are larger than some of their seagoing cousins. On larger lakes, such as the Great Lakes of the USA, or even Lake Constance in Europe, large vessels will be called ships.

But the principle is relatively simple: Wherever you decide to put the boundary between a "ship" and a "boat", about half of all native speakers will disagree with you!
ACCESS_POST_ACTIONS
Signature: Phil White
Non sum felix lepus
Top

Erik and Phil White : Thank you both so much for your help. I really appreciate it.

I spent almost 30 years pf my working life in the Shipping industry, and I always quote the Chief Docks Foreman of Swansea Docks, Sid Osborne, when it comes to this argument. "A boat goes on the boat deck; a ship goes on the sea". (Except submarines of course!)
ACCESS_POST_ACTIONS
Signature: All those years gone to waist!
Bob in Wales
Top
ACCESS_END_OF_TOPIC
Post Reply
5 posts • Page 1 of 1